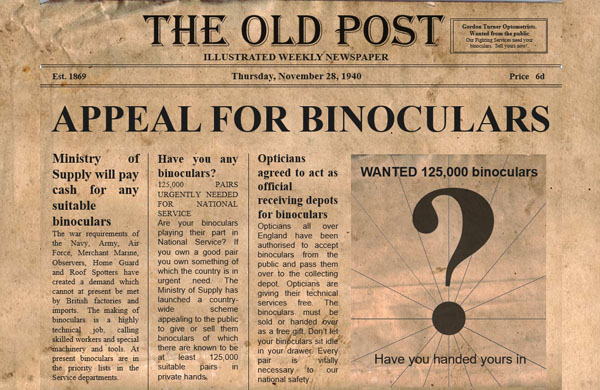 A look at spectacles in WW2

As VE Day approaches, we will remember the members of the Armed Forces and Merchant Navy who gave so much to ensure we all enjoy the freedom we share today as well as the hard-working women and men who worked day and night on the home front.

With VE Day in our thoughts and memories of stories from our grandparents and parents of the very challenging times encountered by people during WW2, we pondered how the skilled labour and goods shortages affected the spectacle industry and the need for troops and people back home to see clearly.

With a little bit of historical research, this is what we discovered.

Appeal for binoculars by Lord Derby

Binoculars were urgently needed for the fighting services.  Skilled craftsmen were making bomb, guns and other vital equipment so the skilled manpower to produce enough binoculars quickly was not possible.  Instead Lord Derby gave an appeal to the public to either donate or sell their binoculars to the Ministry of Supply.  125,000 binoculars were needed.

In every town opticians were authorised collecting agents – giving their services free. The public were encouraged to take their binoculars to the nearest optician displaying a Ministry of Supply poster where they would be given an official receipt in return for their binoculars.

Ordinary spectacles permitted a leakage of gas at the sides of a gas mask and were not to be worn under a respirator.  ‘Frames with thick shell sides cannot be worn in safety with Gas Masks’ declared one optician in Boston. ‘We have a limited stock of special lenses designed to allow for the perfect fitting of Gas Mask’.

Spectacle wearers were advised to have an officially approved gas mask frame fitted to their own prescription.  These frames could be worn under a gas respirator or for ordinary and everyday use.  One advert we found claimed they came complete with laminated lenses affording complete safety from incendiary bombs.

Spectacles for Soldiers and the Home Guard

British inventions included special spectacles for roof spotters with lenses prepared to reduce dazzle to help the wearer to see more clearly when the atmosphere was hazy.

Respirator spectacles were to be supplied at the public expense to members of the Home Guard who normally required spectacles to enable them to shoot accurately.

Gas mask spectacles worn by troops were made to British design. Every soldier needing glasses was provided with two pairs so that if one was broken when in action, he had a spare pair handy.  Soldiers’ spectacles were manufactured with thin, flat sides so they could be worn under the gas mask.

Reports of people complaining of eye strain was common due to the restricted lighting.  An optician in Devon advertised ‘luminous spectacle frames for blackout’ and which could be worn during the daytime. Other opticians encouraged people to have their eyes regularly examined.

Owing to the scarcity of both raw materials and labour, spectacle stocks were dwindling and could not be easily replaced.  Manufacturers were compelled to produce a few strictly Utility Models.  In 1941 manufacturers would supply only single spectacles to client’s individual orders and much repair material at this time were unobtainable.

In 1942 some opticians were able to offer a selection of Pre-War Spectacle Frames but many were no longer available.  Certain colours were impossible to get. In spite of these limitations Verity & Hudson Opticians felt confident that they were ‘still able to provide Glasses to appeal to your good taste’.

In October 1942 Sunderland Education Committee had an urgent appeal for donated spectacles as new spectacle frames could not be obtained for school children with vision problems due to the shortage of nickel.

In the National Interest

The public were encouraged ‘in the interests of National Efficiency’ to be sure that their work did not suffer from neglect of their eyes. Good sight was vital to the War Effort to ensure efficiency and avoid eye-strain.

VE Day weekend is an opportunity for us all to remember the enormous sacrifices that were made and to celebrate the arrival of peace in Europe 75 years ago.

We wish you a happy Bank Holiday weekend.