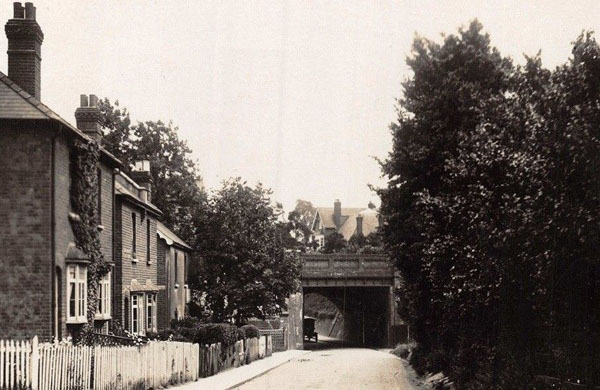 Gordon Turner Optometrists is 65 years old.  First opening in Upper Mulgrave Road, Cheam in 1955 and then moving to its current site in a former cottage in Station Way in 1963.  The picture postcard above shows the former cottage in 1927.

The original semi-detached cottage had been used as a shop but gradually fell into disrepair.  It is thought to have previously been a bookshop.  When the semi-derelict cottage was purchased in 1963 by my father Gordon Turner it was extended to create a waiting room.

An article appeared in ‘The Optician’ magazine in 1963 showcasing the interior of the practice. ‘Both the design of the extension and the renovation of the existing cottage were carried out to Mr Turner’s detailed requirements… Functional features include underfloor heating throughout the premises; a cloakroom and lavatory for patients cleverly built in the depth of a rear “false wall” disguised by handsome Parana pine panelling; and double glazing.”

Forward on 60+ years, the original wooden spectacle displays in our back Dispensing Area have still been retained, a testament to the quality of 1960’s workmanship.  The pine panelling and décor has definitely been replaced though.  A further three extensions have been carried out to make a much more spacious and modern practice but some of the original features of the 1898 cottage can still be seen in the non-public areas.

We see many generations of families in the practice which adds to the pleasure of serving the local community. We would like to thank our customers, old and new, for trusting us in looking after their eye care needs over the past 65 years and we look forward to continuing to build upon our care, commitment and expertise in eye health.